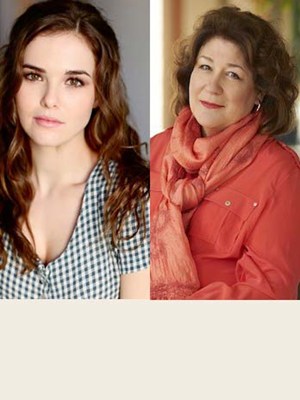 LOS ANGELES, CA, MARCH 16, 2012 - Zoey Deutch and Emmy-winning actress Margo Martindale are in final negotiations to join the cast of the supernatural love story "Beautiful Creatures," based on the New York Times best selling novel of the same name by authors Kami Garcia and Margaret Stohl, it was announced by Alcon co-founders and co-CEOs Broderick Johnson and Andrew Kosove.

A hauntingly intense coming of age story set in the South, "Beautiful Creatures" is about two star-crossed teenage lovers, Ethan, a local boy, and a mysterious new girl, Lena, who uncover dark secrets about their families, their history and their town.

Erwin Stoff ("Water for Elephants," "I Am Legend") will produce along with Kosove and Johnson ("The Blind Side," "The Book of Eli,") and Molly Smith ("Something Borrowed," "P.S. I Love You."). Filming begins next month in and around New Orleans.

Richard LaGravenese ("P.S. I Love You") will direct from his adaptation.

Deutch currently has a reoccurring role in the CW series, "The Ringer" starring Sarah Michelle Gellar and will next be seen in "The Amazing Spider-Man" starring Andrew Garfield and Emma Stone.

Martindale is currently starring in the CBS series "A Gifted Man" as well as the FX hit series "Justified" for which she won an Emmy for her supporting role. Her film credits include "Win Win," "Walk Hard: The Dewey Cox Story," "Million Dollar Baby," "The Hours," among others.

Alcon, which has film rights to all three books in the hugely popular series published by Little Brown Books, including "Beautiful Darkness," and "Beautiful Chaos," is looking at "Creatures" to kick off a possible franchise at Warner Bros.

Deutch is repped by Steve LaManna at Innovative Artists and Gordon Gilbertson at Gilbertson Entertainment.

Martindale is repped by Stephen Hirsh at the The Gersh Agency.

Alcon Entertainment co-founders and co-CEO's Andrew Kosove and Broderick Johnson founded the Company in 1997 with financial backing from Frederick W. Smith, the Founder, Chairman and Chief Executive Officer of FedEx. Alcon, which is named after a mythological archer and ally of Hercules, has financed, and/or co-financed/produced over 19 films, including "My Dog Skip," "Dude, Where's My Car?", "Insomnia," "Racing Stripes," the Academy Award nominated Best Picture "The Blind Side," which earned Sandra Bullock a Best Actress Oscar; "The Book of Eli," starring Denzel Washington and Gary Oldman; "Insomnia," starring Al Pacino, Robin Williams, and Hilary Swank and directed by Chris Nolan; "The Sisterhood of the Traveling Pants," and "P.S. I Love You," starring Hilary Swank, among many others.